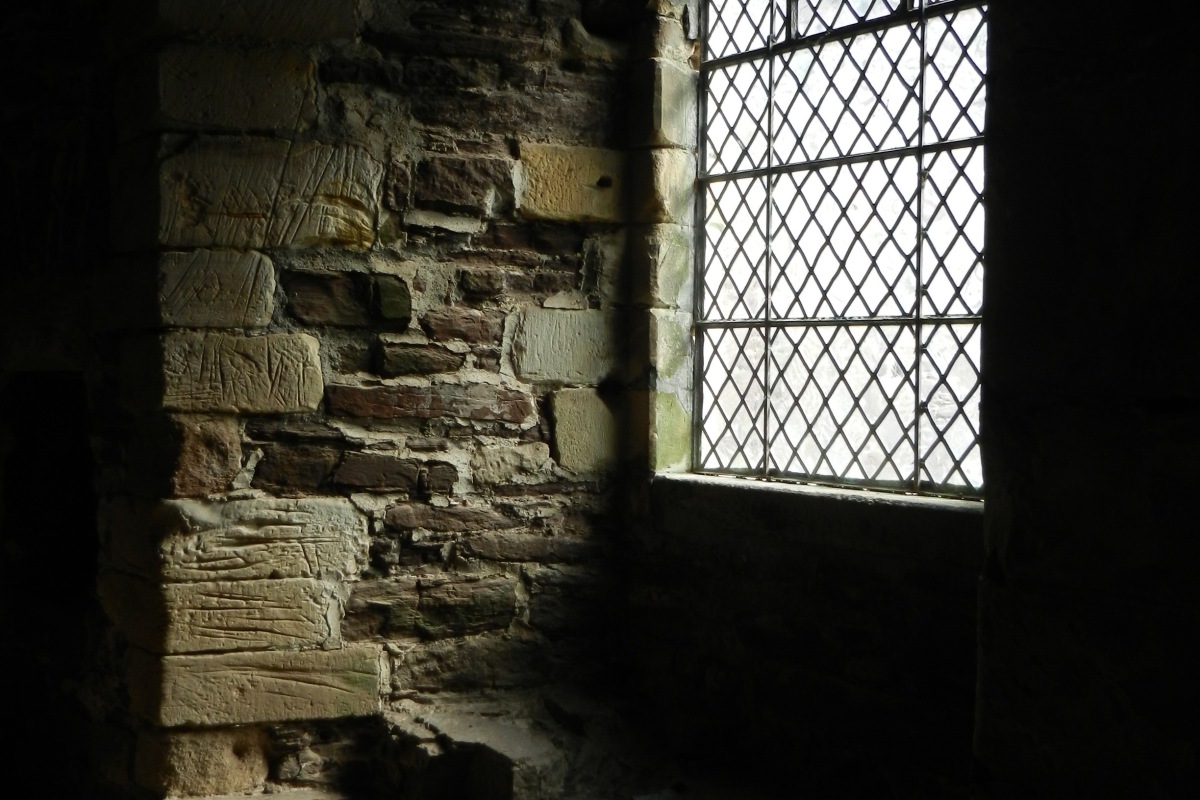 Our journey north and west started with some sun, so that was promising, but we were learning the Scottish weather is as unpredictable this week as a moth’s flight path.

We ate the wonderful lemon muffins and scones for breakfast that we bought at Forsyth’s Tea Room yesterday. They were very tasty! We picked up around the apartment and said goodbye to Edinburgh. Helen picked us up around the block and we were on our way!

As we drove out of Edinburgh and in and around daily traffic, we were reminded that Edinburgh is a thriving, modern community in and amongst great history. Dave and I also noticed the extremely tricky, roundabouts (or rotaries) and we were both glad Helen was driving.

Helen is great fun, and an excellent guide mixing historical information and personal stories about the areas we stop at, viewed, and drove through. She feels it’s the journey that is important, not so much the destination and boy, is that ever the case in this kind of country.

Our first stop today was Doune Castle in the village of Doune. The semi-ruin is a wonderful representation of a late-medieval 1300’s stronghold and an example of the power and wealth of Robert Stewart, the Duke of Albany. He lived like royalty and they called him the “uncrowned king”. You can tell throughout the castle that he had extensive wealth, even in its shell. Really wonderful.

Dave and I were both impressed with how large and extensive this castle is and we both agreed it was better than we were expecting. The movie MONTY PYTHON’S HOLY GRAIL was filmed extensively here inside and out and they most certainly take advantage of that notoriety in the gift shop and for the audio tour. Terry Jones from Monty Python narrates the recorded audio tour. They interject bits of sound effects throughout the tour as only Python can do. It makes for a very entertaining and informational tour.

The sun was still out and our tour continued north and west. I remembered a little goody bag that Beth had given to me when we were in their store the day before with specific instructions for us to open it with Helen when we were on the road. So I grabbed it and opened it. There was a lovely note for us to have a wonderful journal and a small package of Scotch Whiskey Fudge. Quite tasty!

We drove past Stirling Castle where we had been two days ago and info a part of the country known for beauty and rugged landscapes. Little did we know just how MUCH beauty and just how much rugged we would encounter.

Each glen and loch we passed created a new landscape and Helen was wonderful with letting us know what we were looking at and its place in Scottish history or lore. As we entered the area known as The Trossachs, Helen put in a CD of Scottish Movie Themes, so as we were going through Rob Roy country, we were listening to Rob Roy’s movie theme, VERY effective and helped set the “mood”.

Every spot was dramatic in one way or the other and as Helen was describing the area of Rannoch Moor we came upon it and were stunned at how vast, dramatic, rugged and beautiful it was all at once.

Helen indicated the “marsh” area is actually peat fields and it can become quite muddy. Helen is a walker (we call them hikers in the U.S.) and said one really has to know what you’re doing if you’re walking on that kind of terrain.

Next up was Glen Coe. Glen means valley and loch means lake. At the entrance to the Glencoe Pass we stopped at a beautiful waterfalls then proceeded to view the glen. There was a stunning area of three mountains called The Three Sisters where Clan McDonald lived. They used to hide their cattle in between two of the mountains called The Lost Valley. Just spectacular scenery. Then we start imagining the difficulties living in such surroundings and the hardships they had to endure….but then again, most didn’t know better, so they were used to it.

More than 300 years after the event, Glencoe’s name is still synonymous with the brutal slaughter that occurred there in the early hours of February 13, 1692. Thirty-eight men, women, and children, all MacDonalds, were murdered in cold blood by troops carrying out government orders. We saw the area where the signals were given to begin the massacre. Very sad.

We stopped at the Glencoe visitor’s center for a wee big of Mackie’s Icecream, Helen says they’ve been around for years and it’s a Scottish tradition to have some, Delicious!

As we continued on our way around the Trotternish Peninsula and around Loch Linnhe, Helen wanted to stop at artist Bill Lawrence’s studio to make a purchase. She said WE didn’t have to buy anything, but Dave ended up buying 6 photo greeting cards that Bill’s wife Susie had done on film, not digital and we bought a lovely B&W drawing Bill did many years ago. He’s very talented at pen & ink and colored pencil. Really special drawings and he and his wife were very sweet to us.

Our final adventure stop for the day was at Glenfinnan Monument. It’s a statue of, and monument to, Prince Charles Edward and the Jacobites who followed him. The location for the monument is significant because that’s where Bonnie Prince Charlie landed by boat in 1745. It’s also a remarkably beautiful spot on Loch Sheil.

Dinner was at a local restaurant and our overnight accommodations were at the lovely Dailanna Guest House in Fort William overlooking Locheil to the hills of Ardgour. Florence our host was lovely and the house couldn’t have been more comfortable with an amazing view to boot!

For more photos and info about where we visited and stayed in Scotland, please click HERE.